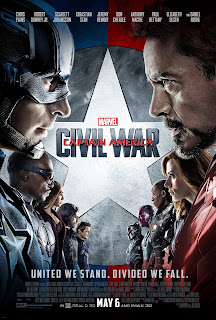 Whether you are looking for big epic fights, lots of fanboy geek-out moments, exciting action, a tense thriller, Marvel's trademark humor, or a more serious examination of superheroes in a real world setting, Captain America: Civil War delivers on all counts.

That might sound like the movie was trying to be too many things at once, but the Russo brothers pull it off. Every element gels. I was entertained from beginning to end.

I can't gush to the extreme of Winter Soldier or Guardians of the Galaxy, though. I can't call it my new favorite Marvel movie. I loved it. I'll see it again. I'll own the Blu-ray. But it lacked... something that I couldn't put my finger on for a couple days.

I finally realized the problem was that unlike those best of the best Marvel installments, this one felt structured. It suffered a bit from having most of the story beats that audiences have come to expect from lesser films. You could feel Act 1 ending and Act 2 beginning and trace how it all comes together.

It's biggest sin was that it gave away what was supposed to be the huge plot twist at the end of the movie with Tony Stark's opening scene. That plot twist was not delivered very well either. It essentially pinned the villain's entire master plan to a major plot contrivance that was hard for me to get past. Like with Age of Ultron, the How It Should Have Ended writes itself. 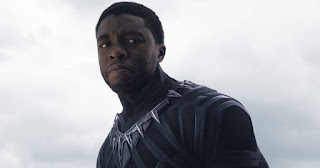 But with so many awesome fights and great scenes that run the spectrum from funny to touching to gripping, it was hard to care about its shortcomings.

Black Panther walked off the page and came to life on the screen. The scenes with Vision and Wanda were both a treat for old school fans and an intriguing element that newer fans who only know about the movies might not have seen coming. Ant-Man's part in the big airport fight was one awesome cheer worthy moment after another.

All of the focus is naturally on the heroes fighting each other, but even the opening scenes surrounding the Avengers chasing down Crossbones grabbed the audience right out of the gate, and set the tone beautifully. 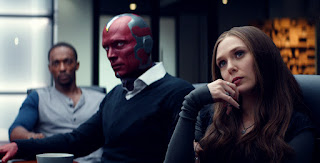 Woven through all that escapism, the drama behind why the rift in the team forms is compelling. Unlike the pitiful comic of the same name, this story is an incredible look at what it would really mean to be a super powered vigilante in a real world with real politics and real consequences. Everyone's motivations make sense and makes the audience think.

Yet it doesn't sacrifice any of the fantasy or fun that makes the superhero genre great. The plot is not just an excuse of make the characters duke it out just to see who would win. At no point do you stop liking any of the characters or forget why you are rooting for... well everyone.

Spider-Man was the stand out star of the big airport battle. He and Ant-Man were there to lighten the tone and they succeeded. 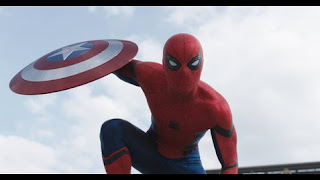 Peter Parker was in some ways a departure from past films, and even the comics to a degree. Tom Holland's portrayal focuses a bit more on the awkward kid angle than his predecessors. But that's not a bad thing. The spirit of the character was a spot on modern take of a shy nerd with a sense of humor and a big heart who suddenly gets awesome super powers.

Seriously, they could have sold advance tickets to Spider-Man's next solo movie in the lobby on the way out and it would have broken box office records.

Bottom line: It doesn't dethrone my top favorite Marvel movies, but it makes a fine addition to the top 5. Go see it. Especially if you are a producer for Warner Brothers. THIS is how you make a superhero movie that normal people outside of hardcore comics fanboys want to see.
Posted by LR Stahlberg at 1:25 PM No comments: