I wasn't even aware that this was widely enough believed to be a thing.

From CBR: Movie Legends Revealed | Was Vader Originally Not Luke’s Father in ‘Empire’?

I will never forget when I was a kid. I had not seen Empire Strikes Back yet, and a neighbor kid spoils the big plot twist for me. Darth Vader is Luke's father. 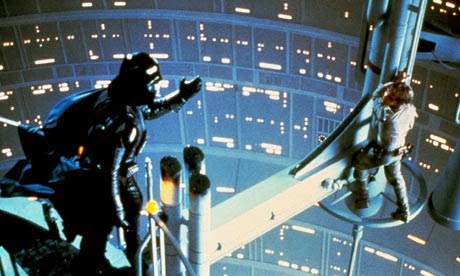 The immediate reaction of this nine year old kid was, "You're lying! That is so fucking stupid!"

Seriously WTF? Even as a child I recognized that when you throw out a plot twist from a left field far, far away, there needs to be SOME hint of it somewhere. Anywhere. The first Star Wars (which had not yet been renamed A New Hope) contained no such hints. Zero. Zilch. Nada. Not even a subtle one.

I remember seeing it in the theater, waiting, hoping, praying that the asshole was just making it up to mess with me. Alas, it was true. That was my first glimpse into the tragic reality that George Lucas is a truly godawful writer.

As you learn from the CBR article, the original screenplay of Empire Strikes Back did not have this twist. It actually made sense. But George hated it and revised it.


Years later, I would see great examples of how to properly handle these kinds of crazy plot twists that you don't see coming. Movies like The Sixth Sense and Fight Club -- whose brilliant and genuinely shocking twists make you look at the entire movie in a completely new light -- would illustrate just how inept Lucas truly was.

It's worth mentioning, for those who don't know me, that I love, nay worship Star Wars. I was a card carrying member of the Star Wars Fan Club through my early teens. I still have my ROTJ Luke Halloween costume that I had custom made for a party. I've seen the original trilogy a combined 8,391 times, and even watched the prequels two or three times each. I admire the vision of it. But I also acknowledge its many warts. And as this revelation further confirms, the franchise has endured thanks to the efforts of so many creative minds greater than Darth Lucas', often despite his best efforts to destroy it.

I've run into many who have argued this point with me. Of course Vader was always meant to be Luke's father, they would claim. There were tons of hints, they would rationalize. The exchange between Aunt Beru and Uncle Owen ("He has too much of his father in him" / "That's what I'm afraid of") or read too much into some throw-away line of Ben Kenobi's.

Uh, no. Those lines established that Luke had some kind of dark twist in his back story, but that's it. There is not one single vague hint of this relationship. The plot twist did not fit at all with the story as presented up to that point.

Even the hints dropped within the supposedly revised script. The flash of Luke's face in Vader's helmet on Dagobah. Talk about ham-fisted, not to mention contrived. It makes more sense if we just take the simple meaning, that Luke was in danger of going to the dark side. Duh.

But he doesn't stop there. Then there's the next bombshell dropped in Return of the Jedi! It's bad enough that Luke's parentage made zero sense, but now he's got a sister, too? How in the name of all that's holy, if the sibling relationship was planned from the beginning, could Lucas have greenlit the kiss scene from Empire -- or have written the kiss for luck before the Tarzan swing in the original -- or made Luke get jealous when Han hinted at putting the moves on her. That wasn't a hint of sibling protection. He was jealous! 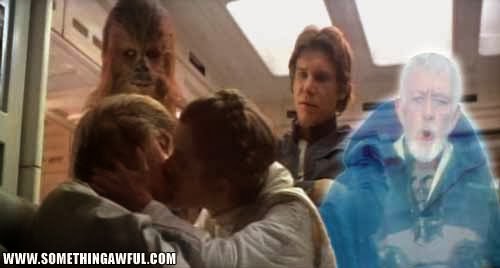 Compounding the nonsensical plot twist with another one added nothing to the story except make it kinda creepy.

Now... It is well known that George kept the secret of the Vader plot twist tightly close to the vest during production. The script he gave the actors said "Obi-Wan is your father". It wasn't until he gave the real script to James Earl Jones that the truth was finally revealed. So I suppose it is possible that in George's head, and George's head alone, he did indeed plan both reveals all along. He just, for some unfathomably paranoid reason, did not tell Leigh Brackett when he hired her to write the screenplay. And so that was part of the impetus for his revisions.

If that is the case, then his sin is not throwing in the plot twist for no reason. It's being so ridiculously coy in his foreshadowing that nobody could possibly pick up on it. Yes, you want to keep your audience guessing. But any big reveal must gel with the story presented up to that point. When looking back in 20/20 hindsight, the audience has to see why and how it fits. 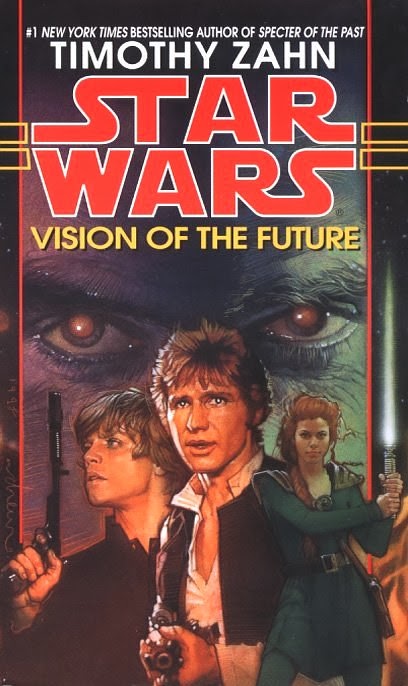 See, I'm not writing this just as a Star Wars rant (though I rarely pass up an opportunity to dump on Darth Lucas). Let this be an object lesson.

To be candid, as much as I love this franchise, I fully admit that it skated a lot on action and special effects. It would not be until Timothy Zahn that fans would see just how cool of a story is buried deep in this setting, that it's creator, ironically, barely explored. So in 1980, movie-going fans didn't even seem to blink at how bizarre the Vader-Luke connection was.

I did. And today's savvy sci-fi readers will not be as forgiving if you pull a stunt like this in your book.

If you have what sounds to you like a cool plot twist in mind for your story, make sure it fits. Make sure it adds to your story. Don't do it for shock value, or because you think you need to throw in more hooks. Think it through. You never know if you'll find yourself writing the prequel some day and you need to write yourself out of a corner.

On one level, the latest controversy over IDW's variant cover by Mimi Yoon strikes me as much ado about nothing.  As in... why do people feel the urge to complain about it. What's the big deal? Why do we care? 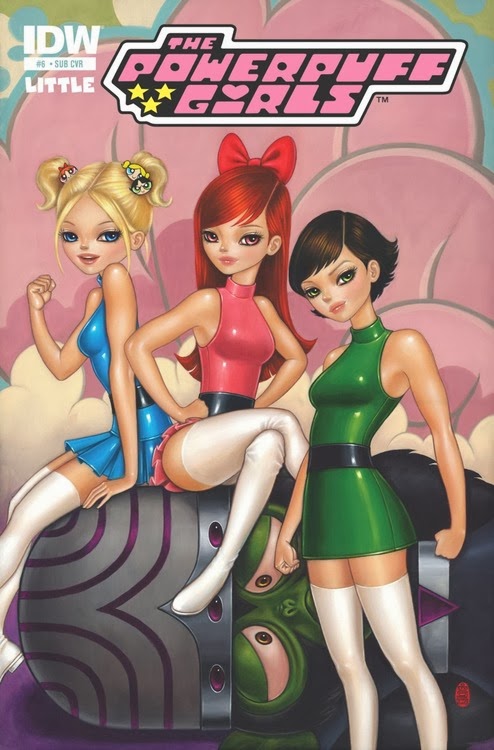 But it's the fact that people do care so much about it that I find telling.

So, there's the cover there. The claim is that it's too "sexualized". Specifically for a property aimed at little kids. According to the comic shop owner who began the assembly line on this manufactured outrage, this image is akin to "perverted fan-fiction". He was "DISGUSTED" (capitals his), citing their "latex bondage dresses." The Outhousers are having a field day with it, too, declaring that the cover is intended to make guys want to bang the Powerpuff Girls and/or wank off.

Now I just had a fascinating discussion with a good friend of mine about "cultural coding" and the negative effect of imagery like this on young girls who think this is what they need to look like when they grow up.


That's all well and good. I contend that it's over-analyzing. I think that attitude is reflective of how we coddle and shelter our kids too much, but it's a well thought out and deeply held position.

Completely unlike what the majority of guys I've heard are saying. 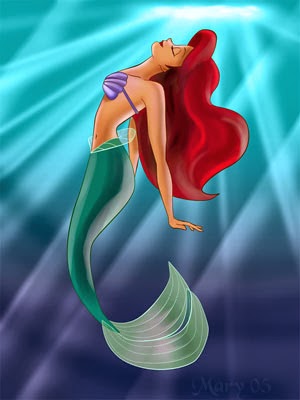 IMHO, there's a lot of projection going on. If the first place your mind goes when you look at that image is something perverted, that's a more of a statement about the speaker than about the art. Just sayin. Do these dudes have the same trouble having to stifle the urge to rub one out after their kids make them watch The Little Mermaid?

As mentioned above, there are women who do not like the cover for different reasons. More rational, but no less alien to my way of thinking.

Especially when you factor in all the women I've seen in these debates who have no problem with the cover at all.  Their reactions range from indifferent, because it's a far cry from the legitimately hyper-sexualized art that pervades comic stands in the post-Image market. To "OMG the Powerpuff Girls grown up. That is awesome!" 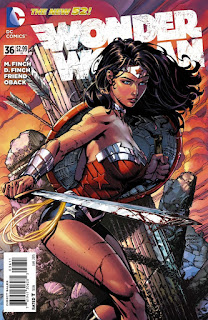 Victims of "cultural coding" I suppose. Betrayers of the sisterhood? Or just girls who appreciate good art and cool characters?

Regardless, the net result foisted on society is that this cover (which will never be sold or likely even displayed under penalty of law) is the new benchmark for what our comic book consumers consider to be "hyper-sexualized" art. This image, which is no more provocative than any Wonder Woman cover drawn since, say 1970 or so. Great.

So fellas! I fully expect this same outrage to be levied at DC Comics on a monthly basis.

Because despite their insistence that their "mature" comics are not targeted at kids, the fact remains that little kids are seeing them. They look up to those characters. They might even want to grow up to be like those characters, just as much as little girls who read Powerpuff Girls. 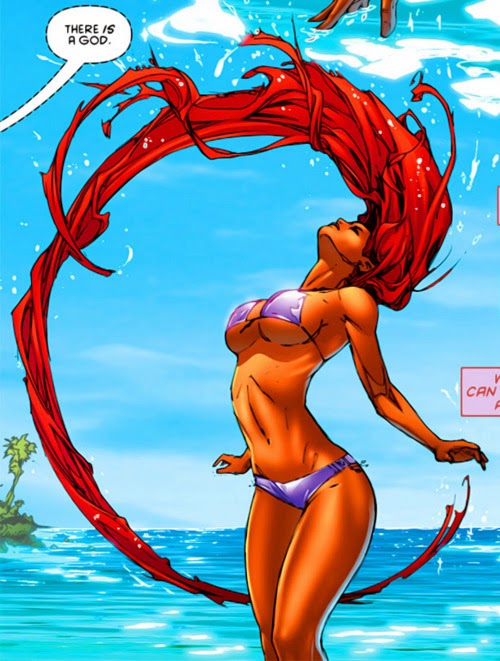 Posted by LR Stahlberg at 10:41 PM No comments: