Bouncing off a round table that my buddy Sean Taylor did about a week ago, The Story Behind Urban Fantasy. It got me to thinking about the stories I watched/read growing up, and the stuff that would eventually inspire me to actually try telling these stories myself.

One of the first books I remember cracking open as a child was The Lion the Witch and the Wardrobe.  I was mesmerized by a world populated by magic creatures and witches and talking animals presented as if it were REAL.  No hoaky, kiddie, cartoony gimmicks.  No singing.  This was a real world where a bunch of kids actually went and battled evil.

I also grew up watching cartoons, natch.  In particular I remember kind of hating Scooby Doo (while sitting glued to this opium for kids every day), thinking how lame it was that every case had to be some stupid old guy playing tricks with fake ghosts and stage magic and whatnot.  Why couldn't they fight real monsters dammit?  Guess the creative geniuses at Hanna Barbera thought that would have been too silly. -_-

But that's how it was for the first roughly two decades of my life.  Creators of the time couldn't seem to bring themselves to mix elements of fantasy or the supernatural into the real world without portraying it as a comedic spoof.  There were a few good attempts, mostly in the horror genre, but they were VERY few and far between.

Except for comic books, the one medium where writers had no constraints.

Eventually Hollywood got crap like Once Bitten out of their systems.  Lost Boys and Buffy the Vampire Slayer, while still campy, were starting to reveal shades of what we were looking for.  That was fine and all for vampires, but in fantasy, we had Highlander, aaaand... Highlander.

Well it turns out a lot of other kids growing up around the same time were thinking the same thing.  They didn't think that the notion of bringing worlds together was only good for laughs.  Fantasy had been stuck in the medieval setting long enough.

Amazing scribes like Laura K Hamilton and Jim Butcher picked up on what Mercedes Lackey had been throwing down and at long last a genre had evolved: Urban Fantasy.  Over in TV Land, Joss Whedon took the cue to transform his parody concept into something fans outside the cult could appreciate, and the floodgates opened on the small screen and especially on bookshelves, where Charlene Harris, Kim Harrison, Patricia Briggs, and a legion of great talent came to play in the new sandbox. 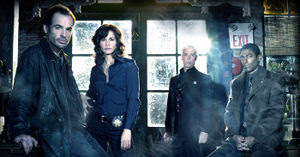 Urban Fantasy has everything that I want.  It's recognized as its own genre, but it's a cross-genre by definition.  It can be a pulp, a mystery, an action thriller, a romance.  It can invoke vampires, demons, faeries, dragons, magic, sword fights between immortals, or a wizard who packs a .44 Magnum.  No limits besides your own imagination.  I wish it hadn't taken this long to come into it's own, but all in all it was worth the wait.

Posted by LR Stahlberg at 7:17 PM No comments: