Back to the Beginning -- Pulps 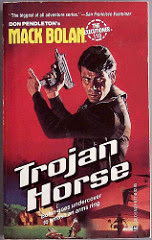 So after floundering for a decade in my half-assed attempt at a writing career, I find myself following the call to write pulp fiction.  It's like I've come full circle, creatively speaking.

I was telling Ron Fortier today at the Windy City Pulp and Paper Con about how I first knew I wanted to be a writer was when I was twelve.  And the stuff I was reading back then, the books that first inspired me, was Don Pendleton's Mack Bolan.  More specifically my favorites of the series were the ones ghost written by Stephen Mertz.

By the time I got into it, the war on the Mafia era was over and The Executioner had become a paramilitary spy thriller.  But it was still a modern day pulp; balls out, wall-to-wall action with a hard assed hero who was anything but a saint -- but still unmistakably a hero.  Those are the kinds of stories I wanted to tell.

But I got sidetracked by life, as so many of us do.  Flash forward to today.  I'm 60,000 words into my first novel (based on the original plot notes of a story I started when I was 12).  I had every intention of writing it as a pulp, but I end up creating so dense a backstory that it becomes more of a crime drama.  I'm still happy with it, but when you go more than three chapters without a gun going off or someone getting slugged, it just ain't a pulp. 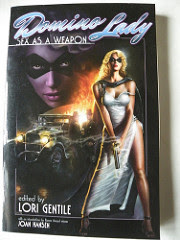 Meanwhile I am seeing a revival of sorts in the "genre" (style, theme, genre, whatever).  They never really died, but there are certainly a hell of a lot more of them these days then I remember seeing ten years ago, when Grown-Up Lance first started thinking seriously about writing.

And not just detectives and spies.  There's urban fantasy, jungle adventure, explorers.  And hot chicks.  Lots and lots of hot chicks.  Hell even Zorro's a chick now, apparently.  I'm all about girl power.  Strong female characters are the best to write.

Then out of nowhere, I am invited to contribute to a superhero pulp anthology.  Talk about the best of both worlds for a comic book fan.  It was fun, and definitely got the creative juices flowing.

So now I've got a writing sample.  Not an unfinished fanfiction.  An honest-to-golly (soon to be) published story with my name on it.  With that sample I got another gig, and the way recent conversations have gone, I think I'm actually going to get a couple more.

Here's the kicker.  I spoke to a couple independent publishers about my writing style and without me even asking(!!) they tell me they are looking for contributors.  I ask if they can send me a story bible of their character/setting.  They say sure!  Wai-Wha?  Just like that.  I've been banging my head against the wall for ten frickin years in the comics world with little more than a "good luck kid".

There is an adage that society does not let you really succeed until you're 40.  Although I am surrounded by exceptions to that rule, perhaps I am evidence of it being true for the rest of us.

Posted by LR Stahlberg at 4:30 PM No comments:

Getting Back in the Saddle

It's been three years since I remembered I had a blog. And boy is the last thing I posted telling. Here I was running a business, and I only considered that one announcement blog worthy. Because truthfully, it was.

The four years I spent trying to make a go of the distribution business were hands down the roughest years of my life. Not because the work was hard. No, that stretch of my life was rough due to the perpetual crap ton of drama I had to deal with. I put on a good front with customers but I kept interviews and PRs to a minimum because I couldn't bring myself to lie and pretend everything was great when it was anything but.

Literally every. single. time something good happened that promised growth for the company, or when I came home revitalized from an exciting con, there would be my so called business partner ready and eager to shoot me down.

That wasn't the case this year after C2E2. There's always been something invigorating about going to comic conventions. I don't go so much as a fan anymore, but I love meeting pros, seeing new projects, and just being immersed in comics culture. And this year when the con was over, I was still holding into the buzz. Two days later I'm still optimistic about the opportunities I came across this weekend. It's kinda surreal.

So God willing this is the start of my journey back out of my shell.  It was getting kinda smelly in there.
Posted by LR Stahlberg at 10:29 PM 1 comment: